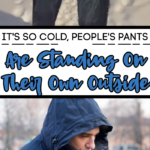 After people have realized that it’s so cold even the yolk of an egg can freeze in mid-air, individuals have gotten a lot more creative on these cold, cold days.

Videos on TikTok are going viral showing just how cold it really is in some states.

In Minnesota you can freeze an egg and in Oklahoma folks are levitating forks levitating after making a bowl of ramen.

And now, people in Illinois are leaving their pants outside to fend for themselves.

It has become so cold in the state of Illinois that some individuals are leaving their pants outside to freeze, waiting a while and when they come back, the pants are completely standing all on their own!

Isn’t that just crazy? I mean, jeans are pretty heavy and it’s so cold, these are being frozen solid upright!

It has now become a challenge for people to partake in the #frozenpantschallenge and it’s going viral all over social media right now.

While this is fun and all, Mother Nature must have been left on read because at this point in time, enough is enough! Bring us Spring!!