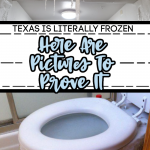 Before anyone from up north comes at me, I was born in raised in the north, I have also spent plenty of time in the mountains.

Texas is in a bad situation right now, the entire state. I’m sure you know just how big Texas is, we are doing our best to stay positive and enjoy the fun parts.

Making The Best Of A Bad Situation

I happen to live in a part of Texas that does get cold and we do get snow, occasionally that snow will even stick on the ground for a few days. Sometimes it doesn’t stick at all.

I’ve even experienced one of the worst ice storms of my life down here. It’s way different than when this stuff happens up north, I promise you that.

Here are some photos that will give you a glimpse of some of Texas right now. We are not afraid of the cold, the snow, or the ice.

However, what is happening right now… well, Texas is just not set up for it. There is really nothing else we could have done as residents to be more prepared, systems failed.

I can tell you that I never experienced icicles hanging from inside my home up north. Ice on the windows, sure… hanging from the ceiling fan… no.

This is how cold it is at my Apartment.

As a Texan, yes, I’m certainly not built for this. I don’t even care. pic.twitter.com/FMt8imglJp

Up north we had to drain our pools for winter, down here there is no reason to because this sort of thing just doesn’t happen. But the pools are frozen solid…

My sister’s pool in Dallas is completely frozen over! pic.twitter.com/PEsZJQxSHB

Toilets are frozen, we’re “not allowed” to drip faucets in some areas. Some people are without water and then a lot of us are on boil notices. I have to boil all of the water that we use.

Going to the restroom in Texas today. (Real pic from a house in Dallas) from r/funny

People have been without power for so long that even olive oil is freezing inside their homes.

The olive oil froze inside my house @ERCOT_ISO. The “temporary controlled rolling” blackout has been 38 hours so far. pic.twitter.com/TNJL4JHhZw

People Without Power For Days

Pet water bowls inside the homes are frozen… IN HOUSTON! Do you know how far South that is??

My dog’s water bowl inside my kitchen lit up with a flashlight. No rolling blackouts. Zero electrons since 2am last night, almost 24hrs. Frozen pipes. Houston Texas. Why not in the federal grid? Why so underprepared #ERCOT #texaspoweroutage #TexasFreeze pic.twitter.com/o22YqfzxsN

Have you ever seen a laptop split in the south from the cold? I think not!

This is how cold it is in Texas right now. My laptop split. Can anything be done? @Apple @tim_cook pic.twitter.com/BA9zoDlkqP

Again, Houston… remember this is far south. In Texas they put sand on the roads, there are no salt trucks. There are no neighbors with trucks that have plows.

This was Houston, Texas on February 15, 2021. Unreal. pic.twitter.com/QOSDIMikVI

Snow on the beaches in Galveston… this is unreal, yet it’s 100% real.

It’s pretty terrible and we are not set up for this. One thing I can say about most Texans, they help each other and I love that!

Remember, people are dying. It is nothing to laugh about. Sincerely, a Michigan girl living in Texas.

22.6K shares
Pants Are Standing Up On Their Own Outside. Here's Why.
← Previous
There Is Another New COVID-19 Symptom And This Time It Has To Do With Your Eyes
Next →
Click here to cancel reply.

but we can send stuff to Mars outer space, I do not understand why we Americans do not take care of our own country first?

Also a former Michigander. The homes up North are built for staying warm - a lot of the homes in my old neighborhood didn't even have AC. The homes in the South are usually designed for staying cool because there's normally a lot more danger from heat stroke than freezing. There's only so much you can do when your home structure just isn't made for the weather you're suddenly facing.