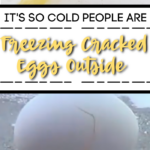 In some states where you can fry an egg on the sidewalk in the summer, it’s so cold across the country that some people are cracking an egg outside to show just how cold the temperatures are.

States that can sizzle an egg outside sunny side up like Texas, are now enduring below freezing temperatures.

Individuals in Minnesota, Missouri, and Texas are cracking eggs outside of their homes and the yolks are freezing in a matter of seconds!

Thanks to the change in the polar vortex, videos surfacing on TikTok are going viral showing TikTokers cracking an egg on the sidewalk or in a pan and before you blink, the entire yolk is frozen solid!

The sunny side up eggs are so frozen that they look similar to the plastic toy eggs that come in the fake kitchen sets for kids!

One individual even placed an egg between slices of bread on either side, slightly cracked the egg to release some of the yolk, removed the bread after a few minutes and the egg was basically levitating while some of the spilled yolk was frozen on the ground!

If it’s cold enough to freeze an egg on the sidewalk, it’s too cold Mother Nature.

This has inspired me to share my recipe for eating beans out of a can with a spoon.

1.) Open the can of beans. You can use an electric can opener, but I recommend a manual can opener for a more authentic feel. If you really want to embrace your inner vagrant, consider using a switchblade.

2.) Insert the spoon into the open beans. Give it a good stir so you can really appreciate the suspension of beans and juice.

3.) Eat the beans. You can chew them if you want, but you don't have to because they're so soft. That's part of the appeal!