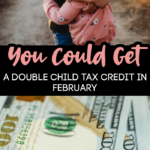 I don’t know about you, but those child tax credits have been a godsend for us, especially during the holiday season!

If the Build Back Better Bill is passed in January, parents could be receiving a double child tax payment in February 2022! What a great late Christmas present!

The bad news? They don’t think the bill will be passed before January, causing no Child Tax Credit payments for that month. But at least they are planning to make up for it!

“If we get it done in January, we’d talk to Treasury officials and others about doing double payments in February as an option. The president wants to see this move forward. It’s a priority for him as soon as Congress returns.”

If the bill passes and everything works out correctly, a double payment of the Child Tax Credit will be issued in February to make up for there being none in January, and then continue monthly as it did in 2021!