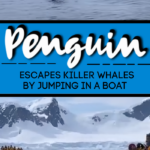 A group of tourists in Antarctica got to experience a once-in-a-lifetime scene involving a penguin and a pod of orcas, and I’m super jealous!

Just imagine that you are perusing a group of icebergs in Antactica, and you happen to see a pod of orcas swimming around your Zodiac boat, close enough to touch.

That, in itself would be amazing, but it’s what happens next that has everyone talking.

While floating on the sea and taking in the gorgeous icebergs, this group of tourists spots a little penguin swimming for its life — quite literally.

It is being chased by the pod of orcas, and they obviously have the little guy on their radar for an afternoon snack.

The crowd of onlookers watches as the little penguin zips through the water, narrowly avoiding the pod of orcas that are hot on his tail.

There are several times that you think the penguin is done for, but then he resurfaces out of the water, and the chase continues.

After several attempts at escape, the penguin flies through the air, and jumps right onboard one of the Zodiac boats with one of the groups of tourists.

Luckily for us, it is all caught on camera, and we get to experience the cool scene along with the tourists who actually got to witness it first hand.

How amazing is this escape?!?

The little penguin just chills on the boat for a bit, and then when the coast is clear, he leaps back into the water, saying goodbye to the passengers on the boat.

What a fantastic day!!

Now, let’s talk for a minute about the fact that a group of people were on a blow-up boat, in the middle of the ocean, and a group of whales was surrounding the little boat.

I would have straight-up freaked out. LOL!!

To see the video of the whole penguin orca adventure, click HERE.

Want to see something else kinda cool? Check out these spiders in Australia that can flatten themselves out to look like a tree branch.