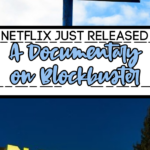 Baby Boomers and Millennials might remember visiting a yellow and blue store that had more movies than what we could count on two hands.

Generation Z, this store was called “Blockbuster”, and it had every movie listed from A to Z.

Your Netflix, was our Blockbuster and sadly, the last Blockbuster store was turned into an Airbnb.. at least it still stands.

Most recently, the popular streaming service has announced that they are releasing an entirely new documentary about the last standing Blockbuster store, called ‘The Last Blockbuster’.

The documentary captures never before seen footage of employees, fans, and nostalgic moments of kids and adults renting their favorite films from once one of the most popular movie rental companies.

Ironically, Blockbuster was offered the opportunity to buy Netflix in its early stages but passed on the offer which was ultimately the end of the movie rental business.

In the nostalgic new documentary, The Last Blockbuster premieres on Netflix starting today on March 15th!

1 shares
This 'Burger Buddy' Helps You Enjoy Burgers Without All The Mess
← Previous
Watch As This Penguin Escapes A Pod Of Killer Whales By Jumping In A Boat Full Of Tourists
Next →
Click here to cancel reply.