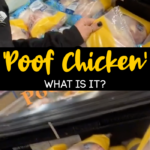 Have you heard anyone talking about “Poof Chicken”?

Apparently, TikTok user @p.e.a.c.e.s4u found some bags of chicken at Walmart that she referred to as “poof bags” because they were puffed up with air.

The post quickly went viral with her claims that turn out to not be factual according to the chicken producer.

I’m here at the Walmart in Valley Stream, and I’m looking over some chickens. I see these big ‘poof’ bags. I told the manager/team leader that this means these bags were left without refrigeration. I know because I’ve done it several times.

In the TikTok video, she shows bags of Perdue chicken leg quarters, so the Daily Dot reached out to them to see what was really up with the poofed-up bags.

Here is what Perdue had to say

These bags were deliberately inflated to help detect leaks in packages. The chicken is safe to eat. As always, it is important to cook poultry to 165 degrees Fahrenheit. The ‘poofed’ bag does not indicate spoilage in this case.

I have to be honest and say that I would totally leave the ‘poof chicken’ alone because I am super weird about meat and I would be nervous.

However, this is a normal practice and is completely safe and FDA approved.