Prince Philip, The Husband Of Queen Elizabeth II, Has Passed Away At 99 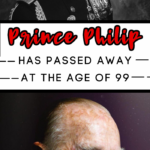 There is sad news out of Buckingham Palace this morning.

Prince Philip, husband of Queen Elizabeth II, has passed away.

He was 99 years old, and he had been married to Queen Elizabeth, his third cousin, nearly 70 years!

His Royal Highness passed away peacefully this morning at Windsor Castle,” the royal family announced. “Further announcements will be made in due course. The Royal Family join with people around the world in mourning his loss

The prince, who is known for being very private, worked hard to champion and bring the image of the royal family into the modern age during a time when Britain was going through intense change.

He was born on the Greek island of Corfu, and had a Greek royal title.

BUT, he gave that up to be with Queen Elizabeth II.

The prince died just short of Queen Elizabeth’s birthday, which is on April 21 — she will be 95 years old.

Our thoughts go out to the royal family at this time, as we know this is a big loss for them all.