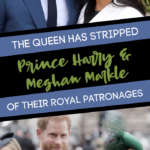 ICYMI, Prince Harry and Meghan Markle have officially been stripped of all their royal patronages.

Yes, this is big news, but FIRST, what the heck is a royal patronage?

If you trust Wikipedia, it says a royal patronage is a “Fount of honour, a representative of a sovereign or formerly sovereign entity who, by virtue of his or her official position, has the exclusive prerogative of conferring legitimate titles of nobility and orders of chivalry to other persons.”

Leave it to The U.S. Sun to come up with a meaning for royal patronage that I can actually understand.

A member of the Royal Family can become a representative or supporter of an organisation as a patron, working to publicise and recognise the group’s work.

Patronage is also, many times, seen as a chance for publicity for the group or organization.

They are endorsed by a member of the royal family, and are seen as “reputable and high quality.”

So, back to Prince Harry and Meghan Markle, collectively known as The Sussexes. The Queen has taken back their royal patronages.

In a Royal Communication dated February 19th, Buckingham Palace made an official statement on the Duke and Duchess of Sussex.

Following conversations with The Duke, The Queen has written confirming that in stepping away from the work of The Royal Family it is not possible to continue with the responsibilities and duties that come with a life of public service.

The honorary military appointments and Royal patronages held by The Duke and Duchess will therefore be returned to Her Majesty, before being redistributed among working members of The Royal Family.

While all are saddened by their decision, The Duke and Duchess remain much loved members of the family.

Don’t worry. Prince Harry and Meghan have released a statement of their own regarding this blow statement from The Royal Family.

As evidenced by their work over the past year, the Duke and Duchess of Sussex remain committed to their duty and service to the U.K. and around the world, and have offered their continued support to the organizations they have represented regardless of official role. We can all live a life of service. Service is universal.

Statement by Prince Harry and Meghan Courtesy of Elle

So, basically, Prince Harry and Meghan may not be “official,” but they are still going to promote and support the organizations they have represented, plus some.

2.2Kshares
This Starbucks French Toast Frappuccino Proves You Can Enjoy Breakfast Anytime of The Day
← Previous
'Painted Icicles' Are The Hot New Home Decor Trend and It's Basically Pure Magic
Next →
Click here to cancel reply.