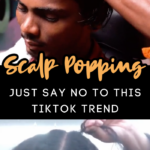 What in the — y’all into some freaky-deaky stuff!!

This barber on TikTok has posted a viral video where he is practicing the art of “Scalp Popping” on a client, and while it’s a bit intriguing (As in, what the hell is he doing??) it also borders on some kind of medieval torture.

He grabs up clumps of his clients hair, and pulls them hard and firm enough to elicit a PoPpInG sound. Ew, right?!?

The client doesn’t appear to be in any pain, but it sure makes me cringe!!

The post, which is from @asmr.barber, is apparently of an Indian barber. The sound is probably heighted just a bit for all those fans of ASMR. But, if a barber ever comes at me with the idea of popping my scalp, it’s going to be a hard no.

Doctors are quick to jump on the “Don’t Do This!!” bandwagon, and I have to agree.

It may sound cool and satisfying to some, but what exactly is this popping doing to your scalp?

@tonyyoundmd, who is TikTok famous for breaking things down for the masses, explains what this “Scalp Popping” is actually doing. “This is when you pull the hair so hard you pop the galea off of the skull that you create a popping sound. AND THIS IS A BARBER DOING THIS!!”

What the heck is a gelea? Let me just school you a bit. It is the “tough fibrous sheet of connective tissue that extends over the cranium, forming the middle (third) layer of the scalp.” I’m pretty sure this is supposed to stay intact 100% of the time!!

The trend is so risky that even TikTok has issued a warning against it on the hashtag #scalppopping: “Performance, imitation, or encouragement of dangerous amateur stunts and risky behavior that can lead to serious injury or death is not permitted on TikTok,” the company said in a statement.

Some TikTok users are saying that they use this method of torture “Scalp Popping” to alleviate headaches, but is it really safe?

@Tonyyounmd says that practicing “Scalp Popping” can lead to bleeding on the inside of your scalp, leaving you with a big “goomba” on the side of your head.

You can cause bleeding or a nasty sore on the side of your head — and really, that is too dang close to your brain for comfort!!

“Please don’t do this!” Dr. Youn wrote in a comment. “It can tear the inside of the scalp, which can bleed a ton on the inside. Think Boxer or MMA fighter with scalp hematoma.”

Even if you DON’T like yourself, PLEASE, don’t try this TikTok trend.

There are just some things that should be left to the weird-os on TikTok, and THIS is definitely one of them.

This is right up there with the Fire Challenge, the Tide Pod Challenge, and Devious Licks Challenge. Just don’t do it.