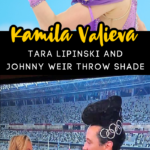 If you haven’t heard, there is a HUGE controversy going down at the winter Olympics in Beijing.

Kamila Valieva, who is from Russia, and favored to take the gold, is in the middle of a doping scandal of epic proportions.

It’s legit like the Shot Heard ‘Round The World.

Kamila claims that she accidentally took her grandfather’s heart medicine before the games — and we’re supposed to believe that. It just so happens that his heart medicine makes it so she has more stamina to skate.

Now, this should be illegal, and knock her out of eligibility to compete. But, for some reason, the rules aren’t applying to her.

The controversy comes because the Olympic committee is allowing her to compete. She won’t be allowed to receive a medal, but that takes it away from someone else who honestly did everything by the rules.

Also, there is some debate about whether they will have a medal ceremony at all if she wins — which would obviously be totally unfair to the other competitors who have worked so hard to get to where they are.

Olympic athletes — not just skaters — are outraged, to say the least.

It is mind blowing that they take doping so seriously, but she is going to just walk away from it and be allowed to compete.

Sure, she gets a slap on the wrist, because she can’t earn a medal, but she shouldn’t be allowed to compete at all, IMHO. I mean, other athletes who were found with drugs in their system have been barred from competing. What’s the special circumstances here??

Now, if you don’t know who Tara Lipinski and Johnny Weir are — first of all, we can’t be friends — they are former olympians who also do the on-air commentary for the skating programs.

You know — they are the people who give us the play-by-play during the ice skating programs.

Usually the commentary is really colorful, making the skating program even more spectacular for us lay people who don’t know a thing about skating — but we sure watch it!

So, Tara Lipinski and Johnny Weir were doing the commentary during the Short Freestyle Ice Skating programs, but they did something that completely showed where they stand on the kamila Valieva situation.

We didn’t get commentary that pointed out her jumps and spins.

They pretty much went radio silent during her whole program.

After the skate, Tara had a little to say on the subject.

I don’t know how many times over the past year I’ve said that [Valieva] is the best figure skater I have ever seen, and just saying that now not only makes me confused, but it makes me angry — and again, disoriented — by everything that I thought that I knew.

Johnny showed sympathy and support to the other skaters with his wrap up of Valieva’s performance.

All I feel like I can say is, that was the short program of Kamila Valieva at the Olympics — We are so sorry it’s overshadowing your Olympics.

Previously, the commentary pair had rave reviews for Kamila. They agreed that she was one of the best figure skaters of all time.

In fact, just last week, she made history by becoming the first woman to land a quadruple jump at an Olympics. Did the heart pills help with that? Maybe. We don’t know for sure.

But, we do know, without a doubt, that she shouldn’t be allowed to even step on the ice at the Olympic Games. I think Tara, Johnny, and all the other skaters and skating community would agree.