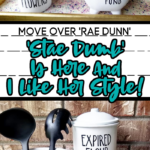 I have to admit, I have a few of the Rae Dunn line of items. One specifically says “Hockey Dad”.

I am neither a Dad nor a parent of a hockey player. However, I like dads and I like hockey and it’s a huge freaking mug.

I like the simplicity of the Rae Dunn line, but most of the sayings are a little too vanilla for me. Don’t get me wrong, I’m not bashing!

I love the hand lettering and the simple look. I just want a little spice!

Today I came across exactly what I need in my life and it is hilarious! The post starts off…

I had never heard of Rae Dunn until recently, when I saw a couple articles about it. Turns out I had seen it, we’ve all seen it – it’s the white housewares that say twee things in big handdrawn caps. You know, the stuff that looks like a Home Goods somehow gained sentience and married a pick-up truck named Trigger or some shit, and now spends all day on Facebook posting “My hubby, blah blah blah, missionary in exchange for chores” memes and e-vites to their nail polish strips pyramid scheme “parties”.I guess what I am saying is that it is not my style.

I saw the addiction to Rae Dunn items unleashed on Facebook on many timelines. They were buying, selling trading… it was pretty cray cray!

No judgement from me, we all have our thing right? I’m pretty sure I found mine today in this post.

There are scalpers who snap up the coveted pieces and gouge buyers. And then I read about Rae Dunn rehab groups for women who have gone thousands, and in some cases tens of thousands, of dollars in debt collecting this stuff, and all of that is really wack and sad and makes me REALLY dislike it.

It’s true, there were some huge addictions going on! Some are still feeding the need that they have developed.

But also… I can’t be the only one who doesn’t love it and might enjoy participating in this trend in a fun, cheeky way, and ALSO-also why shouldn’t *I* get a little piece of this bizarre cash grab? With that, I am launching sales of my new housewares line, Stae Dumb.

So Shawna Jarrett decided she was creating her own line that appealed to her and others (like me!). She’s calling it ‘Stae Dumb’ and I am so here for it!

If a piece speaks to you, lmk lol.(Also DEFINITELY up to do pieces with custom lettering.)Editing to add: DM me if you’re serious, I’m already on to second runs of many of these, which I am happy to do! I’m glad these are a hit, I’ve been working on them for a while and I LOVE THEM.

I’m going to have to redo my entire kitchen now. Thanks Shawna…