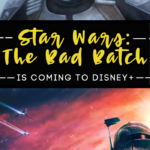 In true Star Wars Day style, Disney+ is bringing out a new series based in a Galaxy Far, Far Away on May the 4th — Star Wars Day.

Lucasfilm and The Walt Disney Company announced today that Star Wars: The Bad Batch — the next Star Wars animated series – will debut on May the 4th, a.k.a Star Wars Day, exclusively on Disney+.

Star Wars: The Bad Batch is going to be based after the events of Revenge of the Sith, and I can’t wait!!

After the Clone Wars happen, the republic clones must try to find their way in this new galaxy during the aftermath of the war.

They must learn to “adapt and survive” this new reality, or “die with the past.”

This CGI animated, original Disney+ series, is finally dropping a new preview, and it looks so good.

Y’all should see how giddy my Star Wars nerd husband is.

Members of Bad Batch, as they prefer to be called — a unique squad of clones who vary genetically from their brothers in the Clone Army — each possess a singular exceptional skill, which makes them extraordinarily effective soldiers and a formidable crew.

The premier is going to be a whopping 70-minutes long, and of course, it is going to drop on Star Wars Day (May the 4th Be With You).

After the premier, a new episode will drop every Friday on Disney+ starting on May the 7th.

Now, I have no idea exactly how many episodes they are planning to release in this first season; I’ll let you know as soon as we find out.

Basically, the only thing we know, as of now, is that the clone troopers that we see at the end of The Clone Wars become mercenaries who go on the run from Imperial forces.

The other thing we know — this show is going to be SO good!!

I just love that Disney+ has decided to make Star Wars side stories into original series!!

The galaxy is a BIG place, and there are plenty of stories to tell.