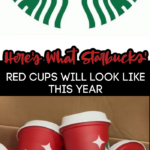 As the holidays become near, the anticipation around Starbucks’ red cup and when the new collection will release grows three sizes similarly to the Grinch’s heart.

And while the coffee giant keeps that date a mystery every year, a few rumors have been circling regarding when the official release date of this year’s red cups will be.

Now I don’t have to tell you that the collection of their reusable cups is free every year with a purchase of one holiday drink.

While keeping the release date a secret, Starbucks has expectedly left this year’s design a mystery too, until now that is.

Thanks to one TikToker who showed a sneak peak of the red cups, we now know what this year’s design will look like and it can be safely said, that these cups look just as festive as what we had hoped!

Decorated in a bold red with giant falling snowflakes around the red cup, the reusable cup is simple but holiday approved.

So now that we have the design down, when can we expect Starbucks to release the infamous red cups?

It’s official – the red cups will release this Thursday, November 17, and as always, get their early to snag one!