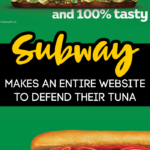 But like…it’s not. If you’ve been following our stories about Subway lately, you probably read about how their tuna has been tested and is not real. (along with maaaany other item)

Between the tuna lawsuit and the bread lawsuit, Subway has been digging their own hole for years. They finally decided to attempt to fight back.

They started by revamping almost their entire menu, making “healthier” options available. But they didn’t change their tuna recipe, which confused a lot of us.

SubwayTunaFacts.com is the first thing you will see if you get on any Subway website.

When clicking on it, you’ll see all sorts of different statements defending the tuna. They even gave us pretty little pictures and diagrams.

A nice little pop-up appears when you enter the page, stating:

“What actually happened is that the New York Times commissioned a test that couldn’t detect tuna DNA in their sample. According to scientific experts, this is not unusual when testing cooked tuna and it absolutely doesn’t mean the sample that was tested contained zero tuna.”

I, for one, would like the names of these scientific experts.

Considering all the other lawsuits and upsets Subway has had in the past, I’m officially done with the chain. And I don’t see a full on website defending a single ingredient as being a good marketing tool…seems a little sus.

1 shares
Starbucks Has A Black Cat Mug Just In Time For Halloween
← Previous
You Can Get A Toblerone Cold Brew From Starbucks To Satisfy Your Sweet Tooth
Next →
Click here to cancel reply.