Starbucks Has A Black Cat Mug Just In Time For Halloween 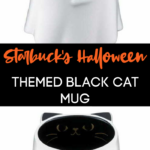 Rumor has it that black cats are bad luck, specifically on Halloween night.

You know the saying, if a black cat happens to pass by on the spookiest night of the year, bad luck begins.

Like many superstitions, we don’t really know if black cats on Halloween night are bad luck or not, but what we do know is Starbucks must think they’re lucky to create a glass mug inspired by the four legged fur-baby.

With that being said, Starbucks is selling a glass tumbler disguised as a ghost on the outside with a black cat on the inside with two golden eyes, a nose, and whiskers.

On the top of the mug you’ll find two perky ears, two small legs on either side and a thin black tail on the back for a sleek look.

You can find Starbuck’s black cat mug currently selling on eBay for $45 and we have a feeling that this mug, is anything but unlucky come spooky season.

1 shares
A 100 Pound Tropical Fish Was Discovered On A Beach Proving The Ocean Still Contains Mysteries
← Previous
Subway Is Fighting Back By Launching An Entire Website Just To Prove Their Tuna Is Real
Next →
Click here to cancel reply.