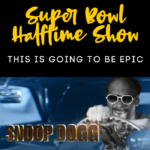 The trailer just dropped for the Super Bowl LVI, and it’s time to get freakin’ pumped!

Yes, I said trailer. This halftime show is so big, it needs its own hollywood-style introduction.

And, just wait until you hear the details.

When is Super Bowl LVI?

We don’t have very long to wait — it’s just WEEKS away!

The players will be taking the field for the 56th annual Super Bowl event on Sunday, February 13th.

It’s going to take place at SoFi Stadium in Inglewood, California — home of the Los Angeles Chargers — and air live on NBC and the Peacock streaming network.

Who is playing in Super Bowl LVI?

The Tampa Bay Buccaneers are the reigning NFL champions, but it is yet to be seen who will be taking the field for Super Bowl LVI.

If you believe the ESPN’s computer model, it has the Kansas City Chiefs playing the Green Bay Packers.

If you are interested — spoiler alert — this model has the Kansas City Chiefs winning the whole thing and taking home all the glory.

After The Weeknd performed an epic Halftime show at last year’s Super Bowl, they knew they had to step it up to even come close to once again outdoing themselves.

And, outdone themselves they have done!

The Powers That Be at Super Bowl LVI have gotten some really hard hitting names to perform at this year’s Super Bowl halftime, and I’m giddy!!

It’s like my teenage self hand picked this halftime show with the PERFECT performers from the past and present.

You HAVE to watch this Super Bowl Halftime trailer!

This first musician Pepsi dropped into this trailer is Eminem. We see him in a studio literally throwing words together, as an audio track of him rapping plays in the background. Doesn’t this man just look better with age?!? Gah!!

After Eminem receives a phone call, we head on out to Cali, where Snoop Dogg is bumping along in his car to a very D – O – Double G beat. Snoop Dogg, y’all!!

Next up on our musical journey is Mary J Blige. She is beautiful as ever as she is getting her makeup touched up and perfected for a photoshoot worthy of a New York billboard.

We then fly to a room where Kendrick Lamar is sitting and writing down song lyrics. They take flight off into the atmosphere, and lead us to a beautiful beach.

Here, we see Dr. Dre walking on the sands of this musical beach, his music playing in the background.

It’s no wonder they needed a trailer worthy of a Hollywood-style movie to announce this Super Bowl LVI Halftime show to the world. It’s giant!

Who are you most excited to see?