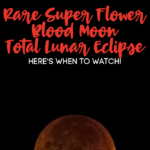 Not only do we have an amazing full moon coming, but we also have a total lunar eclipse to watch!

The last total lunar eclipse we were privileged to view was on May 26th, 2021 and I am super excited about the one we are about to see.

Let’s hope that we have clear skies for the best views!

This full moon is actually a blood moon, which happens during a total lunar eclipse.

During a total lunar eclipse, the moon will have a reddish glow that will sometimes even appear brown, orange, or even yellow.

Since this full moon is also a supermoon it will look larger and brighter, it should be an amazing sight!

This one is also referred to as the flower moon because it is associated with spring and the blooming of flowers.

You won’t need special glasses to view this exciting event, but binoculars and a telescope will help you get a better view.

NASA will host a live stream and I am so happy about that since we may not have the greatest view where I live.

The total lunar eclipse will begin on the night of May 15th at about 10:30 pm Eastern and reach totality around midnight, which will last for about an hour and a half.