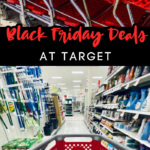 It’s inevitable to walk into Target to shop for one item, only to come out with several house products, cleaning supplies, sweatshirts, and decor.

Knowing this, let’s discuss the elephant in the room; so when does Target’s Black Friday deals begin?

As of right now, Target’s Black Friday deals are too early to tell.

However if it’s anything like last year, there might be a chance of deals starting as early as mid October, and you can sign up for Target emails now so you’re the first to know when the biggest day of holiday shopping starts.

Is it too late to learn about manifestation?

Maybe we can manifest Black Friday deals at Target to start sooner, rather than later instead of just one chaotic day of everyone and their grandmother searching for the best deals on cult favorite items.

Last year, Target released a preview every Thursday of marked down prices leading up to Black Friday; now we’re not sure if it’ll work the same this year, (only Target employees know exactly what will happen), but we very much hope that Target doesn’t change too much.

Keep in mind that Target is doing a repeat of last year and will be closed for Thanksgiving this year, so make sure to check in on Black Friday hours with the Target store locator.

A full cart soon to be filled with holiday wishlist items, here we come!