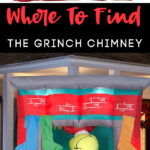 Hundreds of children try and catch Santa climb down the chimney the night before Christmas, but let’s talk about the Grinch who stole Christmas who put everything back the next day just for a moment.

Milk and cookies prepared on Christmas Eve is a snack made for Santa but if the Grinch happens to visit before the big jolly guy, a snack left out for the green character would be wise so he forgets to steal the decorative presents under the Christmas tree.

Deck the yard with an animatronic, light up inflatable of the Grinch climbing down the chimney on Christmas.

The inflatable chimney decorated with colorful stockings, red brick, and a present tied with a bow sitting at the bottom features the Grinch popping in and out of the chimney to check up on everyone’s present status.

He who wears a Christmas hat and red suit acting like Santa is not fooling anyone in the neighborhood this year (expect maybe for Whoville), although the Grinch’s appearance does make for a great holiday decoration in the front yard!

Not to mention, the decorate Christmas piece is 7 feet high which means it most likely be the second largest Christmas decor next to the Christmas tree!

Setup is easy, plug in and watch the magic unfold as it self inflates; you can currently find the moving inflatable Grinch chimney at Lowe’s for $200.