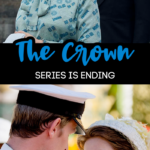 I have loved watching The Crown since it first came out! I LOVE historical fiction and following the lives of the current royal family has been fascinating!

I was so thrilled when they announced that the show had been renewed for the fifth and sixth season. But now they’ve made it clear that season 6 will be the last one.

Executive producer, Suzanne Mackie, gave a little more insight as to why they wouldn’t be continuing the series as of now, during an interview with Broadcast.

She said that Season 6 will end with events that took place in the early 2000s. This is as close as the creator will come to showing the monarchs as they are today.

“Peter has said it very articulately, that he simply can’t write something unless there has been time to gain a proper perspective,” the producer explained.

“I think he’s [Peter] always felt 10 years is the minimum amount of time that he can see something in a historical context, to allow him to really understand it,” she continued, adding, “I don’t think he’ll deviate from that.”

I can understand where they are coming from, but it still saddens me that we won’t be able to continue the series.