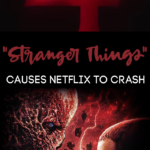 The Duffer brothers have officially caused Netflix to crash.

And if you’re not caught up just yet, the first part of season four featured seven episodes while part two includes the final two episodes everyone has been (patiently) waiting for.

Although, as soon as the new episodes were released on Netflix at 3 a.m. EST, many fans panicked as the big screen before them crashed.

(As if we didn’t wait long enough for the last two episodes!)

Putting aside the Netflix crash, “Stranger Things” also took the liberty to annouce (today), that the fifth season of the Upside Down universe will be the last of its kind.

While season 4 is the “beginning of the end” according to the Duffer Brothers, the confirmed fifth season for “Stranger Things” will include the finale even though we may not want it to end!

Although there’s no release date yet for season five (and that’s okay), because season four is currently keeping us distracted since it was announced that there will a few major deaths in the last two episodes.