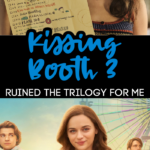 UUUUUUUUUUGGGGGGGGGGHHHHHH. That’s seriously how I feel after watching The Kissing Booth 3.

I was SO excited to watch this, knowing it was going to be the last of the trilogy. I had to know how it ended. I’ve been rooting for Elle and Noah since day one, so it was time to see their happy ending. NOT.

If you haven’t seen it yet, or aren’t a fan of spoilers, please watch the movie before reading the rest of this…because I am definitely not holding back.

I think I spent 97% of the movie literally yelling “NO” over and over and over. So much so that I started losing my voice…

In a nutshell, Elle has to choose between Harvard/Noah and Berkley/Lee. Essentially the same premise of all of the movies, deciding between grouchy Noah and baby Lee.

So, of course, instead of figuring out what SHE wants, she continues trying to please both of them, and work, and babysit her brother, and, oh yeah, complete an ENTIRE beach bucket list that she just HAPPENED to remember existed.

Of course, she eventually crashes and burns. Noah breaks up with her after finding out she’s going to Harvard because he doesn’t want to be the reason. (Which is sweet but also NO). The Rachel breaks up with Lee for a similar reason. (NO).

And, of course, they bring back both Marco AND Chloe to add more unnecessary drama. I really wish they would have left them out of it…completely.

In the end, Elle upsets everyone, has a mental breakdown, finds herself, and FINALLY starts making her own decisions. But her and Noah don’t get back together…

THEN it fast forwards to SIX YEARS LATER. SIX. Not months, YEARS. So I’m thinking, ok, a bit much, but at least I get to see the happily ever after!

NOPE. BIG WHOPPING NO. Rachel and Lee got back together and were talking about their future wedding, which is great. But from the looks of it, Elle and Noah hadn’t even hung out, let along rekindled ANYTHING. WHAT?!?!?!??!?!

SIX YEARS. Six years of not being together, not talking, not trying to be together. IT. DOESN’T. MAKE. SENSE.

The movie literally ends with them saying they should hang out sometime, and then we see them riding motorcycles together. The end. I can think up about 234982798745897920 better endings. And for this to be the end of a trilogy, they did us DIRTY.

The first movie was SO iconic. I’ve re-watched it so many times. But now I feel like the whole series is just ruined for me. Thanks a lot Netflix. Alright…I’m gonna go cry now.

I am in 100% agreement. I have heard Joey King's explanation of the ending and why but if I really wanted to guess or draw my own conclusions I wouldn't have even watched the movie. Also who really wants to watch a movie with a bad ending or not ending. Completely disappointed in the movie and finding out the third book is actually base on the movie not the movie on the book means I can't even turn there for my HEA so will definitely not be paying to buy it now.