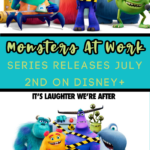 The monsters are back!

Mike Wazowski and his best friend James P. Sullivan are back for scares, I mean laughs…

Monsters At Work, the spinoff series from ‘Monsters, Inc.’ was originally announced in April of 2019 and was pushed back in production due to the pandemic.

Considering many individuals are back to work, so are the monsters and they’re back for laughter, not screams.

The television series will feature a few familiar faces including John Goodman and Billy Crystal, (the furry blue monster and the one-eyed green guy) alongside new characters including Tylor Tuskmon, voiced by Ben Feldman and Roz’s twin sister named Roze.