The Trailer For The LIVE ACTION Dora The Explorer Movie Is Here, And I Have So Many Feelings 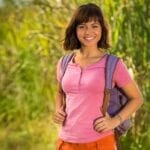 A Live Action Dora The Explorer movie is coming to theaters this summer, and no, that’s not a joke.

If you’re the mom of a teenager, you spent about five straight years of your life listening to your kid scream at the TV to help Dora solve mysteries and keep her finds from a pesky little weasel.

And no lie, after watching the trailer, I kind of want to see it.

Read: Why I Blocked Caillou

Here’s what we know about the live action Dora The Explorer movie so far.

It’s called Dora and The Lost City of Gold. Which means we are going on an adventure people. GET READY.

FREAKING EVA LONGORIA is in the live action Dora the Explorer movie.

And BOOTS! Boots is there too!

Which, I am so glad, because you can’t have Dora without Boots.

When she runs sees her cousin, Diego for the first time everyone is pretty much SHOCKED at the glow up.

No, but for real though. Is Diego 35? I mean, he was always supposed to be a little cooler right?

Dora is totally wearing Backpack even though she’s supposed to be a teenager now, and not 7 like in the shows.

She keeps all sorts of crazy stuff in there.

And she’s not alone, she gets to take a whole classroom full of friends on her adventure.

Oh, and she’s kind of a badass. Like, real life mercenaries are after her, and Dora the Explorer is just ready to DEAL WITH IT.

But MAP was strangely absent in this trailer. How will she know where to go?

Also missing was SWIPER. How will we ever make it through this movie with NO SWIPING?!?!

But all in all, this movie looks kind of awesome, and I am excited.