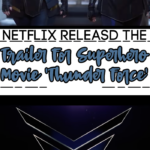 Another superhero film is in the works, but this time, it’s a comedy!

Some of the best superhero films are made with laughter, aka Deadpool one and Deadpool two.

Netflix is jumping on the superhero train and creating a film based on two superhero best friends who protect city life.

It’s at no surprise that Melissa McCarthy is starring in another comedic film, as her previous roles were also very humorous, including Identity Theft, Brides Maids and so much more.

Octavia Spencer is best known for her roles in The Help and Hidden Figures, which are two excellent movies.

The new film ‘Thunder Force’, is set in a world terrorized by super-villains.

Now, it is up to Thunder Force to save the world, or city rather.

‘Thunder Force’ drops on Netflix next month on April 9th.

13 shares
Everyone Is Obsessed With This Viral TikTok iPhone Hack and I'm Trying It Now
← Previous
Miley Cyrus Is Calling For A Hannah Montana And Megan Thee Stallion Collab And I'm Giddy
Next →
Click here to cancel reply.