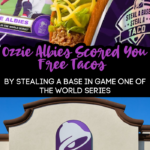 This will make the tenth year that Taco Bell has given away free tacos with the ‘Steal a Base, Steal a Taco’ promotion for the World Series.

This year, the second baseman for the Atlanta Braves, Ozzie Albies is your ‘Taco Hero’ because he stole second base in the first inning against the Houston Astros in game 1 of the World Series.

Before the World Series began, Taco Bell made the announcement that they would:

Celebrate America’s Taco Hero and give away a free Nacho Cheese Doritos Locos Tacos for everyone in America, while supplies last, on a specified date that will be unveiled at a later time.

Well, the date has officially been specified, and you can celebrate with your free taco from Taco Bell on Thursday, November 4th.

The free taco deal is available in-store or by using the Taco Bell app, you do not have to buy anything to get your free taco, but it is limited to one per person according to promotion rules.

Taco Bell Rewards members can get a FREE taco NOW!

If you’re a Taco Bell Rewards member you can get a free taco before the Nov. 4 giveaway by using the app.

As long as you had signed up before the first game of the World Series you have early access to the free Doritos Locos Taco.

It’s already been added to the app and it will expire on November 3rd at 11:59 pm, then on the 4th, you can get the other free taco as mentioned above.