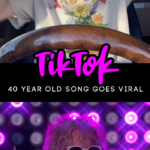 It is crazy, the way that social media influences so many things.

You can use it to stay connected to news, you can get viral recipes, you can finding out how our favorite restaurant dishes are made, you can learn about a plethora of challenges, you can keep up with your favorite celebrities, and even — in this case — TikTok can reignite a music career.

All it takes is one TikTok going viral, and it’s all anybody is talking about.

Meet Zach Montana. He is a 19-year-old musician, who also happens to have quite the following on TikTok.

Back in January, Zach borrowed his dad’s car to go to a routine therapy appointment. But, what happened next is far from routine.

He wanted something to listen to, so he took to the CD player in the car. That is when he discovered an awesome song that he wasn’t familiar with.

He was just thinking how amazing this song was, when the lead singer started his vocal track. Zach was floored when he heard his dad singing back to him through the truck speakers.

“I’m listening and I’m thinking, ‘Whoa, this is really good,’” Montana told TODAY Parents. “Then the vocals come on and I hear a very familiar voice — and I’m like, ‘Oh my God, that’s my dad.”

Turns out, the track was an unreleased song that dates back to the 70s. And, the song belonged to his DAD!

The song, which is over 40 years old, was never released, because Mr. Smith didn’t have a record deal. But, record deals don’t really matter these days. Anyone can put out a song.

Now, his dad — William “Curly” Smith — is no stranger to all things music. Zack comes by his musical abilities honestly.

Smith is best known as Boston’s drummer — he toured and recorded with the rock band from 1994 to 2001 — but the singer and guitarist has also done session work for artists such as Rick Springfield, Bette Midler and Bonnie Raitt.

Zach immediately took to TikTok with his reactions to the song — he wanted to play the song so the world could hear this never-before-aired song.

Turns out, people LOVED the song.

“Surrender to Me” was placed on Spotify, where it has racked up more than a million hits!

The song has been so popular Jimmy Kimmel Live even jumped at the chance to have Zach and his dad perform the song together for the show.

Of course, my dad is more excited about what it means for me,” Montana revealed. “He’s like, ‘This is gonna get your music so much attention.’ That’s what kind of person he is.

You can hear the song “Surrender to Me” HERE.