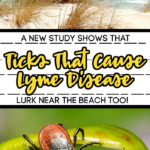 Living out in the country, I have always been aware of ticks… nasty little critters.

My grandmother had lyme disease that was caused from the tiniest deer tick ever.

Like I don’t even know how they spotted the tick on her it was so small.

The thing is, I always associated ticks with being near the woods and out in the country.

You know, places with tall grass, lots of tress, etc.

I never thought about areas near the ocean beaches…

We went into new habitats and found them in numbers we didn’t expect.

Daniel Salkeld, the lead author of a new study said

Well, a new study has concluded that the ticks that can cause lyme disease are actually as plentiful near the beaches as they are in the woods!

I mean, at the lake I am always aware and checking for ticks.

However, many people are not looking for ticks when heading to the beach.

Ticks are tiny bugs and could be hiding in the coastal grasses.

People walk near and through the coastal grasses to get to the beach.

A few years ago I would have said the ticks there wouldn’t have been infected because there aren’t any grey squirrels, which are the source for Lyme in California.

Daniel Salkeld, the lead author of a new study said

They were shocked by how many adult black-legged ticks in the grassy areas and coastal scrub leading to the beach.

The numbers were as much as they found in the woods.

These ticks were carrying Borrelia burgdorferi, which is the bacterium that causes Lyme disease.

The researchers conducting the study found Borrelia burgdorferi in 4.1 percent of adult ticks in coastal scrub.

They found Borrelia burgdorferi in 3.9 percent of adult ticks in the woodland areas.

At this time they are not sure how the ticks for infected with the bacterium.

But they do believe it could be voles or rabbits.

According to the CDC, about 476,000 Americans are diagnosed and treated for Lyme disease each year.

There is good news though!

According to the study, the ticks were not found on the actual beach itself.

Just in the grasses and coastal scrubs.

1 shares
Many Colleges And Universities Are Going To Require A COVID-19 Vaccination To Attend
← Previous
Netflix Is Cracking Down On Password Sharing. Here's What We Know.
Next →
Click here to cancel reply.