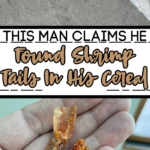 It’s Monday morning and to cure the Monday blues you’ve decided to skip a healthy hearty breakfast and have turned to Cinnamon Toast Crunch for a sugary boost.

You begin to pour your cereal but you notice something out of the ordinary.

At first you believe it’s a cluster of sugar, maybe two cinnamon toast crunch squares combined in one but with a closer look, it appears to be shrimp tails coated in sugar.

This was the morning of Topanga’s (Danielle Fishel) husband Jensen Karp.

Jensen Karp is a comedian but this is not a bit, the Los Angeles based comedian, writer, and dad, claims he discovered his findings this Monday.

After already eating one bowl, he went for seconds to share with his young son and that’s when the fish tails were revealed!

Along with the shrimp tails, Karp told TODAY that he also noticed little black specks that looked similar to rat droppings baked into the squares and some green pea-sized thing that was also inside the cereal box.

If you’re currently chowing down a bowl of Cinnamon Toast Crunch, I wouldn’t blame you if set your cereal aside for this morning and went with toast instead.

According to the comedian, he and his wife had bought the family sized box at Costco in Woodland Hills, California where the fish tails were found in one bag while the other was apparently sealed with clear tape with a loose string of dental floss inside.

Seriously what is going on?!

Karp took to social media and tagged Cinnamon Toast Crunch headquarters as they promptly responded with a “no”, those are not fish tails and claims that the findings are just an accumulation of sugar.

So what really happened?

Was there a fluke at the General Mills manufacturing facility or did a creepy customer take advantage of a Costco’s accommodating return policy?

For now there are a lot of questions unanswered until Karp can get more updates.

Cinnamon Toast Crunch has also responded on Instagram about the incident after Karp’s tweets have gone viral.

“While we are still investigating this matter, we can say with confidence that this did not occur at our facility,” company spokesperson Mike Siemienas said in statement. “We are waiting for the consumer to send us the package to investigate further. Any consumers who notice their cereal box or bag has been tampered with, such as the clear tape that was found in this case, should contact us.”

Since the incident, the internet has gone nuts and a couple of celebrities have chimed in on Twitter too.

Seth Rogan advised Karp that he would cut his mouth off and Padma Lakshmi replied with a sarcastic “Sweet & savory” comment, I mean she’s not wrong.

With jokes aside, General Mills has yet to further reach out about the matter after they advised Karp to send the unfortunate box of cereal to HQ while Costco has been sitting quietly on the sidelines.

Karp recently told TODAY that he paid a visit to the hospital after poison control suggested they test the black parts after he ate an entire bowl.