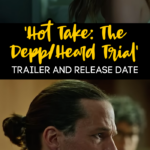 Did you watch the Johnny Depp and Amber Heard trial?

We covered it from start to finish, but now there is a movie from Tubi that is bringing it all back to your television screen.

I just watched the trailer and it seems that both stars have their characters down, from the looks to the behaviors.

The new movie also stars Melissa Marty as Johnny Depp’s lawyer Camille Vasquez who gained many fans as well as Mary Carrig as Amber Heard’s attorney Elaine Bredehoft, who wasn’t liked all that much.

It’s day one of the Depp vs. Heard defamation trial; though fans are showing support for both sides, there’s clearly a favorite here.

A reporter says in the trailer below

The trial actually felt like watching a movie, some things were just so far out there that you could tell there was a lot of acting involved in the testimonies, especially from Amber Heard.

I remember when she fired her PR team and hired a new team to try to clean up after herself, then they were emailing us trying to change our opinions… it didn’t work Amber…

We believe the court made errors that prevented a just and fair verdict consistent with the First Amendment. While we realize today’s filing will ignite the Twitter bonfires, there are steps we need to take to ensure both fairness and justice.

a spokesperson for Heard said