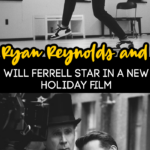 They say not to be a Scrooge during the Christmas season but it looks like Ryan Reynolds is doing just that.

Starring Will Ferrell and Ryan Reynolds, we finally have a release date for their latest movie together that we can officially say, is coming very soon!

And thanks to Apple Original Films, we finally have the exact date to watch!

The new movie Spirited written and directed by Sean Anders and John Morris, is a musical version of the classic film A Christmas Carol by Charles Dickens.

Ryan will play the part of a Scrooge like-character while Will is expected to play the Ghost of Christmas Present; we can also expect Octavia Spencer to play Ryan’s “good-natured co-worker.”

Similarly to A Christmas Carol, Ryan will be visited by various ghosts of Christmas Past, Present, and Future with new songs to be debuted throughout the film too!

Better yet, the movie can be seen up on the big screen and on your living room TV; Spirited will release in theaters on November 11 and will be available to watch from your couch on Apple TV+ November 18!