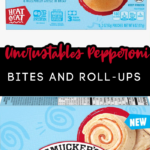 The iconic peanut butter and jelly soft sandwich with absolutely zero crust in sight has since revamped their brand into several other sandwiches and snacks for lunch time.

The brand new Uncrustables that come in bite sized sandwiches and roll-ups are stuffed with a popular pizza topping.

For this next batch, you can expect pepperoni in every bite!

Whether or not you prefer a delectable roll-up or a simple sandwich bite, both varieties are stuffed with warm pepperoni.

Starting with the Uncrustables Pepperoni Bites and similar to a slice of pizza off the street, these mini sandwiches feature circular bread stuffed with marinara sauce, mozzarella cheese, and uncured pepperoni.

Just like the original Uncrustables, the Pepperoni Roll-Ups have to be thawed.

The flatbread swirl is rolled with uncured pepperoni, provolone, Neufchâtel cheeses, and seasoning, skipping out on the red sauce.

Each box includes three twin packs and require less than a minute to heat up in the microwave, score, and all there is left to do is to heat and eat to prepare a small snack or to pack a meal for lunch if you’re running late on time.

While the mini sandwiches are already packed and shelved in grocery stores nationwide, the pepperoni roll-ups are currently only available at Kroger and Target, but will become nationwide ready come October!

It looks like spooky season will be consumed with sheet pans of Uncrustables Pepperoni Bites instead of candy in a bowl this year.