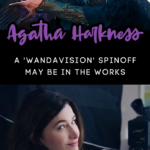 Giddy!! This news has made me nothing but giddy today!!

Disney is in the planning stages for a WandaVision spinoff that will be all about Agatha Harkness — the purple witch whom Wanda defeated at the end of — quite frankly — the best Marvel series of the 2021.

Now, it’s still early in the development phase, but Kathryn Hahn would reprise her role as that badass witch, Agatha.

We know that it is supposed to be a dark comedy of sorts, but they are keeping any other information as far as series details and plot dynamics on the hush-hush. It’s on a need-to-know basis, and we don’t need to know — yet.

That GENIUS writer of WandaVision, Jac Schaeffer, is going to act as head writer and executive producer for this series, which I’m dubbing the Agatha Harkness Project.

The powers that be over at Disney and Marvel have not even verified that this series will, indeed, be going forward, but I’m crossing my fingers and toes that the plans are full-steam-ahead!!

Kathryn Hahn previously signed a Marvel and 20th Television (a division of Walt Disney Television) agreement back in May, and this would be the first project under that deal.

If you recall, in WandaVision, Agnes started out as the nosey neighbor to Wanda and Vision. We were led to believe that she was on Wanda’s side, and she even helped her out of a pinch in several episodes.

We later found out, however, that she was Agatha Harkness, the powerful witch who was actually AGAINST Wanda. She tried to unlock The Scarlet Witch’s (Wanda) power, and use it as her own, but she actually ended up teaching Wanda what it would take to defeat her in the end.

What do you think? Are you as hella excited about this new spinoff as I am??