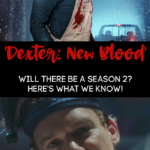 Y’all, I am on the edge of my seat, tonight is the final episode of ‘Dexter: New Blood’…

But, is it REALLY the final episode, the end of Dexter Morgan and Harrison?

Scott Reynolds, one of the Showtime writers behind ‘Dexter: New Blood’ made a cryptic tweet that has my brain spinning.

He said that on Monday he would have something exciting to share with all of us about ‘Dexter: New Blood’ and immediately so many scenarios started forming in my brain.

Will There Be A Second Season Of ‘Dexter: New Blood’?

Dude… PLEASE let it be a second season, this is seriously my favorite show EVER.

The suspense and wait are killing me and I guess that was the point of the cryptic enticing tweet that Scott posted.

Will There Be A ‘Dexter’ Movie?

If it’s not another season, is it a movie? Maybe a spinoff about Harrison?

I mean he is literally like a superhero, right?

Superheros get movies, why not Dexter Morgan?

Ugh, I am on the edge of my seat, who else is freaking out over the suspense of knowing what the big announcement is?