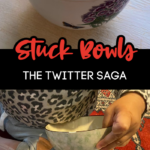 In what turned into a three-day saga on Twitter, this lady finally managed to get two stubborn ceramic bowls unstuck thanks to the help of the Twitterverse.

Chi Nguyen was doing the mundane task of washing the dishes, and accidentally got two ceramic bowls stuck together. One smaller bowl inside a bigger bowl, stuck like glue.

She tried everything she could think to get those bowls unstuck.

For two days she struggled with trying to break the seal on the two bowls.

She knew that if she broke the seal, the larger bowl would release its grip on the smaller bowl.

Without knowing what else to do, she took to the world of Twitter for help.

Twitter, I need your help. I stacked a ceramic bowl into another one while doing dishes and now they are stuck. How do you remove the smaller bowl without breaking both of them? Why am I so invested? I’ve tried to fix this for 2 days, and I cannot give up now.

Of course, Twitter users immediately jumped in to offer helpful suggestions for the spooning bowls.

In a series of Tweets that followed, Chi gave a few hilarious updates on the status of the two bowls.

She tried everything from WD-40, using toothpicks and cards to break the seal, warm soapy water, freezing the bowls, and “Passive-aggressive comments to either/both bowls.” LOL!!

It took 3 days, but Chi finally managed to get the bowls separated — not without chipping the baby bowl in the process. #JustASlightFail

How did she get them unstuck?

I think it’s leaving it alone for a while upside down + suction cup + banged on floor!!!

You can read through the entire hilarious thread HERE.