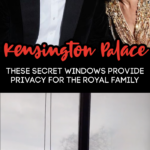 I love it when we get a sneak peek into the lives of the royals. Living vicariously through the royal family makes my mundane days just a bit easier.

Whether it’s watching every bit of the royal weddings, obsessing over their traditions, or watching as their kids act like normal 4 year olds — I love it all!!

Thanks to the magic of TikTok, we are getting a glimpse inside life at Kensington Palace — the official home of the Duke and Duchess of Cambridge.

Side Note: In case you are fluent in royal talk, the Duke and Duchess of Cambridge are Prince William and Kate Middleton.

So, apparently they give tours of Kensington Palace. HELLO!! Bucket list!!

As you can imagine, things could get weird with public tours happening in someone’s private home.

Not to worry. Will and Kate have their own private quarters, and the rest of the Palace is fair game for tourists.

I’m sure that doesn’t stop people from trying to spot a royal. I’m sure it’s kind of like a living Where’s Waldo game.

There are, however, tricks that the Palace has in place to keep the public from gawking at the royals in Kensington Palace.

One of those royal hacks was exposed by Laura-Ann Barr on TikTok, and it’s pretty cool.

At first glance at the windows that look out into the gardens at Kensington Palace, you might not even notice anything is different.

But, upon closer inspection, you might notice that the right side of all the windows have kind of a blurry film on them.

But, this blurry film on the windows serves a pretty cool purpose.

See, if you look out the window and off to the right, you would see the private garden of Will and Kate.

The blurred out portion of the windows makes it quite impossible to actually see into that private garden.

While that’s a bummer for tourists, I can imagine it would be a God-send for the royal family.

I bet they don’t get a whole lot of privacy out in the real world. But, this little hack gives them just enough privacy to feel comfortable in their own home.

To see Laura-Ann Barr’s full TikTok video showing the windows of the Palace, you can go HERE.