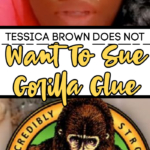 Gorilla Glue has dodged a bullet, even though we all know the reports around Tessica Brown supposedly suing the company probably wouldn’t stick.

Tessica Brown has come out to officially report that she never had plans to file a lawsuit against Gorilla Glue.

“No, I’ve never ever said that,” she said during an interview with “Entertainment Tonight.” “Again, I don’t know where all of this is coming from. Because at this point, everybody is saying it.”

In the interview, Tessica also explained that she only went to social media because she was in dire need of assistance to get the permanent glue that was not budging out of her hair.

Tessica Brown’s video received millions of views causing an uproar online, creating a shockwave across the country and when she was asked if she had any regrets posting the video, she wishes she can turn back the clock.

“Definitely. I told my son today, ‘I wish I could just, I mean, go back because I’m over it.’”

“If y’all knew me, y’all know I would never, ever do anything for clout. If y’all knew me, y’all would love me,” she said in response to the allegations. “Everything that y’all saying, call me, talk to me. I will talk to you. I really would talk to a lot of people. I’m not that person y’all trying to make me out to be.”

It has definitely been a long journey for Ms. Tessica Brown.

187 shares
Mom's On TikTok Are Flashing Their Breastfed Babies And The Reactions Are Priceless
← Previous
People Are Making Mini Heaters Out of Flower Pots To Stay Warm While The Power Is Out
Next →
Click here to cancel reply.