My mom was the first person to ever tell me that women shouldn’t limit themselves when it comes to screwing. Even though she and my dad were married, he was an aerospace contractor and spent maybe six months out of the year out of town working jobs in other cities. If she waited around for him to screw, she’d have been waiting for a long time. And sometimes a woman’s got to do what a woman’s got to do. And if that means screwing, then screw it: Women Can Screw, Too.

The best thing about my mom, though, is that she made sure I knew how to screw good and proper. She wanted me to know that it was always my choice to screw and that as long as I was doing it right it might be a lot of fun. I love my mom for that. A lot of moms kind of hedge around the subject…like maybe they feel awkward or they don’t want their girls to be hurt or they want their girls to leave the screwing up to the man, but not mine. My mom was a grab the headboard with both fists, climb on top and screw kind of screwer. She waited for no man.

Because of my mom, I’ve never been hesitant about screwing and I’m so grateful. It means that when I need to get the job done, I step up and do it myself. So in honor of my mom, here are 10 Things Women Can Screw. Of course, there are always more, but mostly I want to open you up to the idea of screwing…and let you take it as far as you want from there. 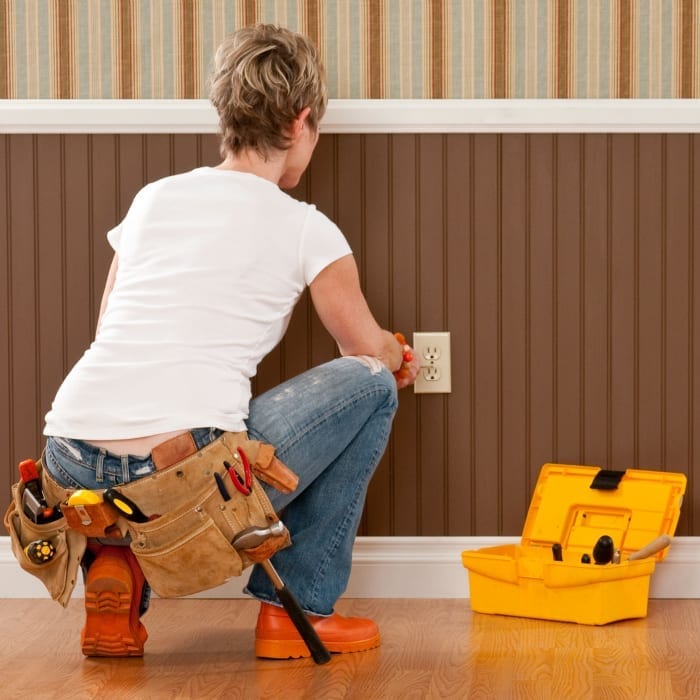 Also, because screwing is serious business there are some things you might want to pick up for yourself: 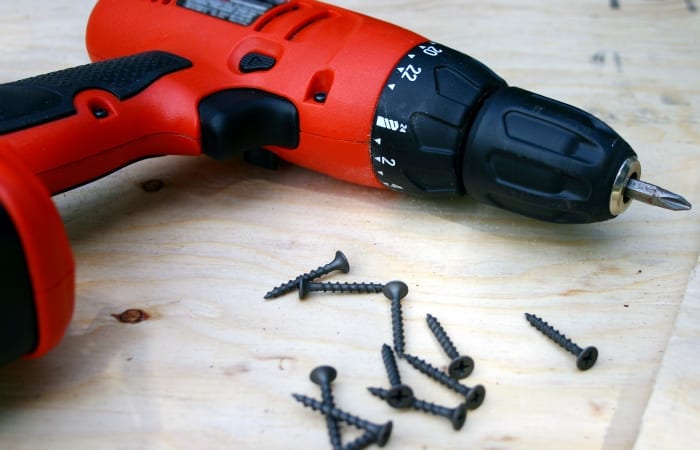 1. Toilet seats – these are easy. You just unscrew from the bottom of the old seat, yank that puppy out, then drop the new one in and screw the new bolts on. Truly the easiest of all home repairs.

2. Hinges and handles – also super easy. Hold the handle tight against the wood (or whatever), and then righty tighty, lefty loosy until the old one pops off. Then, pop the new one on. With this, it’s easier to get the screw through the wood, then align the handle on top. Hinges are the same, but put them over the holes and then pop in the screw.

3. Thermostats – you shouldn’t ‘have’ to turn off the electricity for this one, but I do anyway. Pull the old thermostat away from the wall. There’s a couple of little wires. Just untwist them, then twist them to the new wires and pop it back into the wall. Sometimes you have to screw bits on the thermostat, but otherwise, pretty easy repair.

4. Plate covers – back to the super duper easy stuff. Just unscrew the old one, pop your gorgeous new beautiful one on, and get to screwing. 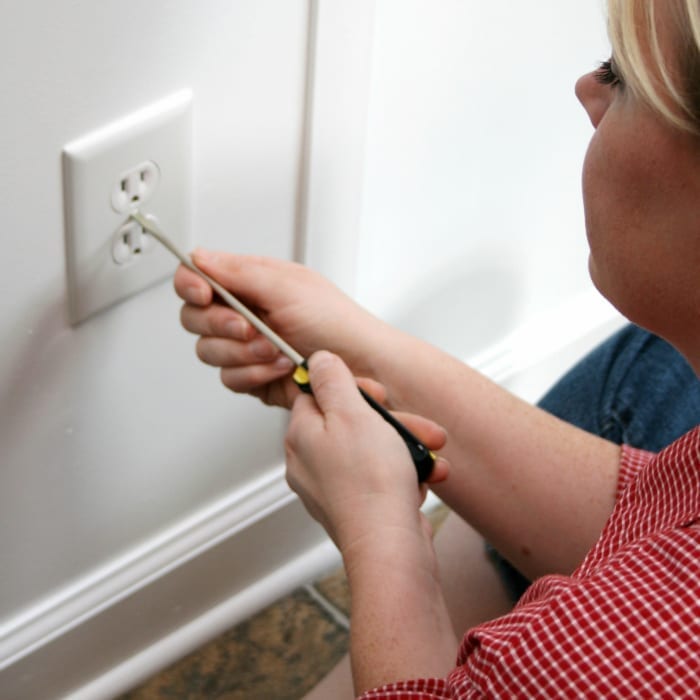 5. Door knobs – these are easy, but a little involved. Here’s a YouTube video to make things less complicated.

6. Light fixtures – for this, make sure you have a ladder with a shelf, or a helper. Also, this is not about installing from scratch…this is just changing out one for another. Power DEFINITELY OFF for this one. Basically, you’re going to unscrew everything, then untangle the two wires that are attached inside (there should be only two…unless there was a different kind of light or fan or something at some point). Attach those wires to your new light fixture, screw everything else back into place, and you’re done. Some are more complicated than others, but just Youtube it. You really can do this one.

7. Fans – this one is identical to the light fixture, but with three wires. Also, there’s a lot more screwing what with the blades and all. Now, you might be thinking fans are too big for you to install, but pishaw, I say. What I do is get the heavy part up first, then attach the fan blades. Easy peasy.

8. Buildable furniture – you might think you hate this one, but it’s actually a lot of fun building those little bookshelves, desks, and whatnots that we get at Ikea. Just go through the instructions, keep those tools at hand, and when you’re done tell yourself that you’re a Modern Freakin’ Furniture Building Genius. Or, at least, that’s what I do. 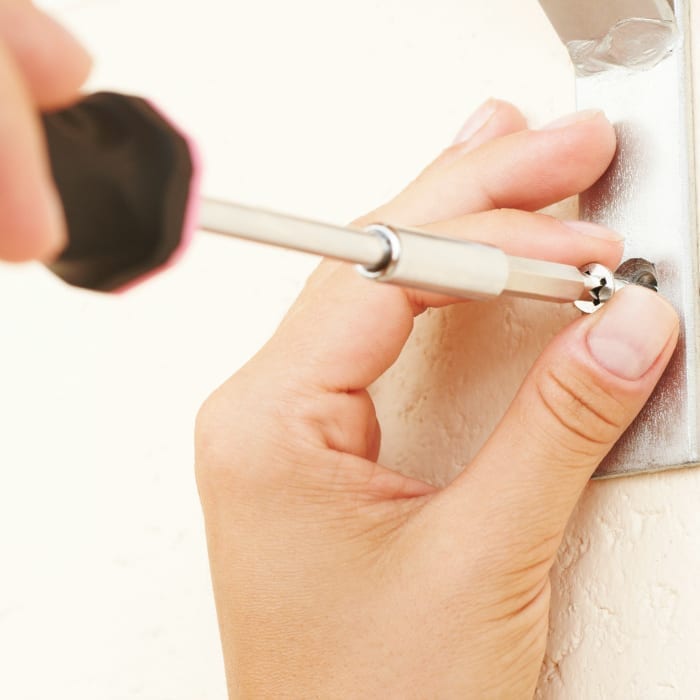 9. Outlets – this is another TURN THE POWER OFF one. But also, way easier than you’d think. I turned all my two-prongs into three-prongs in an hour one afternoon. Basically, unscrew the plate cover, unscrew the little screw(s) attached to the outlet, untangle the wires. Then, connect the new wires, rescrew everything back in, and you’re good to go.

10. Hanging pictures – so on this one you need a level, too. A pocket level is fine…you don’t need a huge ol’ stick with this. Just pop the level on top of the picture and make sure the bubble is inside the line. Also, depending on how big your picture is, you might need a helper. Oh, and a pencil. Basically, just put your picture in place just a smidge lower than where you want it to be, draw a line from end to end at the top of the picture (once it’s level), then (and this is a trick I do) put the screws in place in the back of the picture and secure with tape. Put the picture up over the line (as close as you can figure) and press so that the screws make indentations in the drywall. Then, just take the screws out, line them up on the line with where the indentations were, and voila! Picture is hung! Yeah, yeah, you can measure and all that with this, but I’m all for the easiest possible road on things. 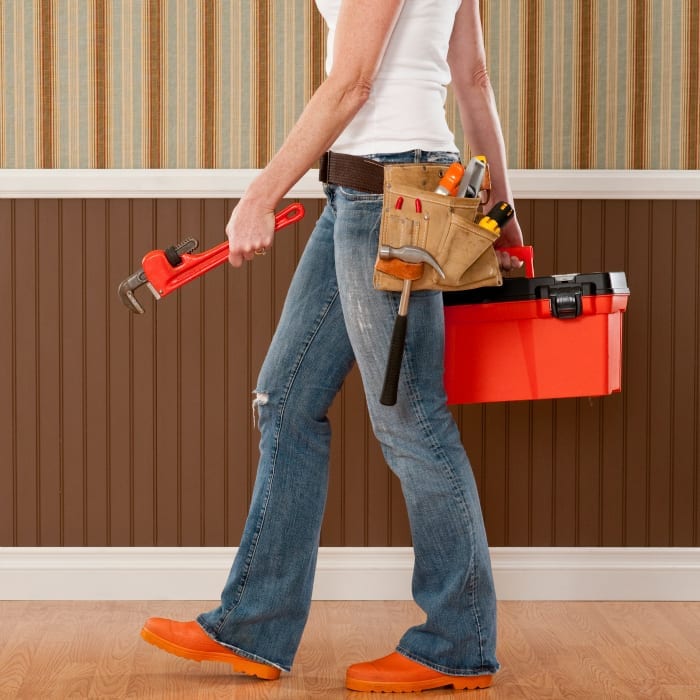 So here’s one last really big piece of advice: if you’re asking if you need to turn the power off for a project, just turn the power off. Your refrigerator will hold whilst you’re working, so just do it. Also, don’t worry about finding the right room or the whole flippy thing where you flip switches in the breaker box until you’ve got the right one, just flip the big one at the bottom. That turns off the whole house. None of the projects take more than an hour (the fan takes about 45 minutes) so you’ll have power back on in no time. And if the kids complain, tell them they can help or they can go outside and play. They’ll live.

Finally, I know some of you have been screwing for years. You’re reading this and thinking, “Man, does this person just think women are weaklings who can’t take care of themselves or something?” Uh, heck no! Actually, this is written for the women who didn’t KNOW they could do these things. Or, maybe they just never tried. Some of you are already masters at screwing, and probably banging, too. So really, this post is not intended for you. It ‘might’ be intended for your friend who waits on her S.O. to do everything for her, though. So make sure to forward it to that friend. And keep on rocking, mighty women. You can do whatever the heck you want. 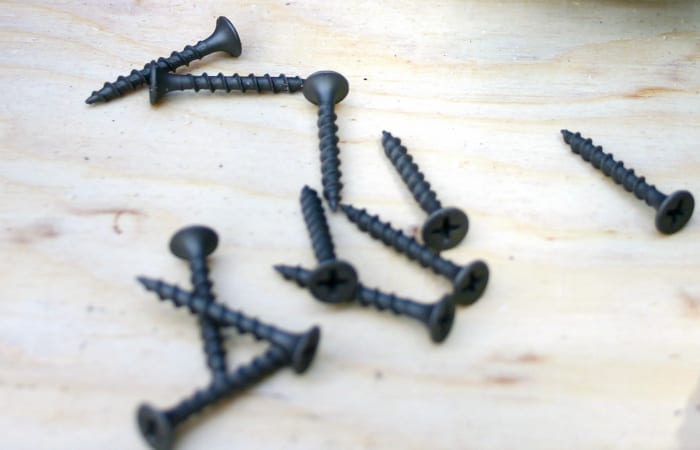 For #9, it is important that you attach a ground wire to the green ground lug, otherwise you could create an electrical hazard.

Anything that could even possibly have electrical or mechanical power going to it needs to be powered off at the source - breaker box - and tested at the switch to ensure there is no power to it. being handy is great but only if you survive.

YES! This is an awesome rule of thumb to know!