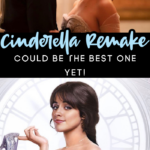 If you haven’t heard yet, there’s a new Cinderella movie out. And if you’re semi cynical like me, you probably thought…why?!

There have been SO many Cinderella remakes that I wrote this one off before watching it. But I have been happily mistaken, and have a list of reasons why this remake is one you won’t want to miss!

It’s Not All About Bagging A Prince

This is the best one in my opinion. Rather than pining over a prince the entire movie, this Cinderella is actually searching out her own goals and dreams of being a gown designer!

The Music Is PHENOMINAL

And that’s an understatement. A lot of pop songs and mashups were incorporated, making this a treat to listen to!

When I heard that the ‘fairy godmother’ was going to be a fabulous gay man of color, I was ALL for it! And Billy Porter ROCKED it!

The Evil Stepmother Finally Got A Backstory

Rather than be a complete cliche as the Wicked Stepmother, this one had actual feelings and even a backstory to understand her better!

They Used The Costume Designer From Bridgerton!

If you were wondering how the outfits came out so amazingly, you can thank the same brilliant minds behind Bridgerton. I would happily watch this movie simply for the gown choices!

No matter your reason behind choosing to watch this, it’s definitely worth it! Let us know what you think!