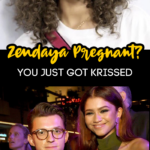 Um. No. Don’t believe everything you see in the world of social media, people.

In fact, Zendaya has taken to Instagram to tell us that we’re all crazy.

Okay. She didn’t exactly say we are crazy, but she did say people are out there making stuff up about her All. Of. The. Time.

See now this is why I stay off Twitter. Just making stuff for no reason…weekly.

Why did she even have to address the issue?

Because of a silly little trend called “You just got Krissed.”

What Is “You Got Krissed” All About?

“Getting Krissed” is almost exactly like getting “Rickrolled” a few years back.

BUT, getting “Rickrolled” happened when Rick Astley’s “Never Gonna Give You Up” video randomly appeared out of nowhere on a seemingly different video.

“Getting Krissed” is where people are posting fake celebrity news, and then following it up with a picture of Kris Jenner dancing to “Lady Marmalade,” and the quote “You just got Krissed” appearing on the screen.

Why Did Everyone Think Zendaya Was Pregnant?

There was a video posted on social media that was supposedly by Zendaya.

This video was a pregnancy announcement, and even included a fake sonogram of a baby and a caption that said “I love you. Halfway there.”

The person who posted the video went to great lengths to make their video appear like the real deal.

Details were the key, and details they surely gave us.

There was even a fake comment “made” by Marisa Tomei, congratulating the happy couple.

Just to clarify — it was all FAKE.

Zendaya is, in fact, NOT pregnant.

BUT, just because she isn’t currently pregnant hasn’t stopped her BF, Tom Holland, from expressing his goals for the future.

So, to recap, Zendaya and Tom are NOT expecting a baby.

And also, you shouldn’t believe everything you see on the interwebs.