So, I’m sitting around at iHop last night, (yeah, I like to pretend it’s an apple product, makes me feel all cool) and we started talking Young Adult Literature. (That’s YA for those of you in the biz.)

The thing about YA is you want to keep it young and fresh without sounding like an old tool. So… you have to be careful with your word choice.

For one thing: The words that are all the rage right now, might not be the bee’s knees in six months, which would make your novel kind of well, a novelty of sorts.

So, how do we the writers write characters that sound like teenagers without making them dated?

That’s a tough deal, and something I struggle with all the time. So, I decided to come up with a list of phrases that always make us eye roll do anything but eye roll.

You remember this from the late nineties, right? Someone would say, “Man, that shirt looks so good on you.” Then, for a split second, you think you’re wearing a really banging shirt… right before they throw out the, “Not!” This is over… don’t use it anymore.

This is actually the phrase that made everyone start wondering about phrases that kids just weren’t saying anymore. I am a little torn on this one because I think it’s still kind of cute, and something that people say in an ironic throwback way. Rosemary agrees, so the rule on this word is you can use it–if you’re being cute.

So, I’m sitting in my bedroom and I ask my daughter to do something. She pops her little hand on her mini-skirted hip and says, “Shno.”

I give her the confusion face. “Um, what the crow does shno mean?”

So, as a rule of thumb–if a four year old is using the slang term, teenagers are probably over it.

This was funny one time. In Clueless. So, unless you’re channeling Alicia Silverstone circa 1995, then don’t. 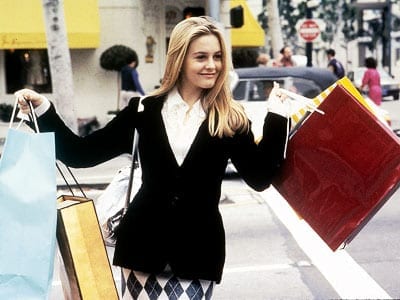 And, no form of it not duh, no duh, doy, no doy. These were cool when we were kids, but this is another one of those super cool ironic flashback words… so then I will allow it.

So, um get the picture, double loser?

Love the article FIVE SLANG TERMS YOU CAN’T USE IN YA! However, from an old English (Not Olde English) teacher, wtfudge? If I can't say duh, what CAN I say? Is there a site for that? The Slang Thesaurus doesn't really give options. Write me another article please, ASAP!

Word makes me want to yak--I'm talking technicolor yawn here. No, really, I'm down. But I'm having hashbrowns, so pass the ranch.

Phew. I was worried some of my slang would be on this list, but I'm think I'm in the clear. I do want pancakes now though. ;)