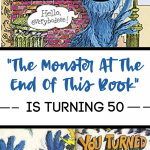 When I was a teeny tot, there was one book that I LOVED more than any other.

It sat on my shelf, bright and new, and I still own it today, tattered and a bit worse for the wear.

I am, of course, talking about the “The Monster at the End of This Book.”

The book, which stars Grover — the big blue monster from Seasame Street — first came out in 1971, and it has been encouraging and inspiring people ever since.

This year, it turns 50, and its sales and creative inspiration are still running strong.

It’s one of the top-10 selling Little Golden Books of all time. A decade-old interactive app version has been downloaded more than half a million times and is among the most popular book apps. Last fall, HBO Max released an animated special based on the book, giving sales another bump.

The book may just be 2 pieces of cardboard, with 24 pages in between, but it is truly a work that taught (and still teaches) so many writers that it is okay to have a bit of fun, play with story form, and sometimes break that fourth wall completely down.

Right from the beginning of the book, Grover is impatient. He is trying to peel the corner of the page back to read the rest of the story.

He then notices the title of the book — “The Monster at the End of This Book.”

He gets scared, and decides he doesn’t want to continue reading the book.

He says he is afraid of monsters, and tries his hardest not to let the reader go to the next page of the story.

Then you get to the end, and the monster is — SPOILER ALERT — Grover!

He learns that he didn’t have to be scared in the first place, and it was okay to read the story all the way to the end.

What a lesson for kids and adults, alike!!

It’s okay to be afraid, but you should sometimes face your fears head on. The outcome isn’t as scary as you might think.

If you don’t own this book, it’s not too late!! You can go to the Amazon website, and get your OWN copy of “The Monster at the End of This Book.”