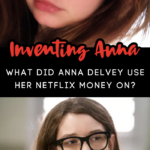 If you aren’t watching Inventing Anna on Netflix, stop what you are doing, pull up Netflix, and start binge watching!

It is absolutely insane that this is a real story. Like, how?!?

You might not know this, but the REAL Anna Delvey — er Anna Sorokin — was actually paid by Netflix for making the limited series, Inventing Anna.

But, under the circumstances, all that money that she was to receive from Netflix was confiscated — so she’s actually getting none of it.

Now, if you don’t know the story, Anna was an Instagram-famous “German heiress” who worked her way into the New York’s social scene — stealing the hearts of the young influencers — while she also stole their money.

There wasn’t even one of them who (at first) suspected she wasn’t the real deal. They all agreed that there was NO WAY Anna Delvey didn’t come from money. She looked the part, she flawlessly played the part, and they ALL wanted to be seen with her — to be in her inner circle.

She somehow convinced the New York social scene that she had a $60 million trust fund coming from her daddy.

At the same time, she scammed everyone — getting them to pay for EVERYTHING for her.

I mean, this girl wore ONLY the best, stayed in only the best hotels, ate only the best things, took vacations that only the rich and famous will ever experience. She WAS the New York social scene.

Until it all came crashing down on her.

She swindled people, she swindled financial institutions — like, how was this her real life?!?

Sorokin was ultimately arrested in 2017 on grand-larceny charges and sat trial in 2019. She was found guilty of eight counts and acquitted on two — including the most severe one, attempted grand larceny of over $1 million from City National Bank.

Netflix allegedly paid Ms. Sorkin $320,000 to tell her story — but that money is going towards something other than the lifestyle likes to keep.

Sorokin has used $199,000 of the money to pay restitution to the banks, plus another $24,000 to settle state fines, according to records reviewed by Insider.

This is a rarely used law which prevents criminals from profiting from their crimes — a law that was passed in 1977 after serial killer David Berkowitz (the “Son of Sam”) received money for a memoir about his crimes.

Anna’s case was complicated, however. Since she was going to use her earnings to pay her victims back, her money was unfrozen before she even got out of prison.