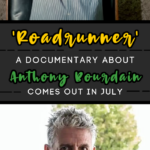 There is a new documentary that is supposed to come out this summer, and the trailer is giving me all the feels.

Can you believe it has been FOUR years since we lost the genius, Anthony Bourdain?

I was CRUSHED when I found out he was no longer part of this world — a world that he contributed to so much!

This documentary, called Roadrunner, is going to be about Anthony Bourdain, his travels, his interviews, and those closest to him.

Roadrunner: A Film About Anthony Bourdain is an intimate, behind-the-scenes look at how an anonymous chef became a world-renowned cultural icon.

Anthony experienced SO MUCH, and we are going to go along for the ride, as he tours for his books, as he explores the coolest parts of this world for work and play, and we even catch a glimpse of his vulnerable side — when he starts to talk about his struggles in life.

You’re probably going to find out about it anyway, so here’s a little preemptive truth telling — There’s no happy ending.

This film features food industry leaders talking about how much they loved Anthony, and we even get to hear voice-overs from Anthony, himself — I’m tearing up just thinking about it!!

It was almost never about food, it was about Tony learning how to be a better person.

Roadrunner will have its world debut at the Tribeca Film Festival on June 11th — but obviously we can’t all see it then.

We won’t have to wait long, however, because the film is set to hit U.S. cinemas on July 16th.

It will hit U.K. theaters later this summer, and then is expected to be released worldwide.

According to Variety, once the film has been released in U.S. theaters, “Roadrunner will air on CNN and on the HBO Max streaming service at a later, undisclosed date.”

If you need me, I’ll be at the store, buying a box of tissues, and waiting for the release this July.

You can see the full Roadrunner trailer on the Focus Features YouTube page.