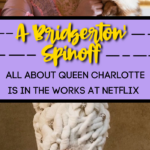 We have more Bridgerton news, and it’s simply fantastic!!

Can we just take a moment to bask in the awesomeness that is the Netflix show Bridgerton?

It is so good — and I’m about to start a THIRD binge watch of the show.

We already know that the series has been renewed for TWO more seasons, and I can’t flipping wait!!

But now, we got word that Netflix is doing a Bridgerton spinoff, and it is about the queen — Queen Charlotte.

She wasn’t my favorite character from the show, but I bet we are about to learn so much about her — and I’m sure we will all love her in the end.

Since Shonda Rhimes is writing this series, you know it is going to be juicy, steamy, and all kinds of fantastic!

I can’t wait to get the back story on Queen Charlotte and all her royal romps that happened before the world of Bridgerton!!

Per the Netflix Twitter page, we know that Violet Bridgerton and young Lady Danbury are going to also make an appearance.

In case it has been too long since you’ve seen the ORIGINAL Bridgerton, and need a reminder, Violet Bridgerton is the mother of the Bridgerton crew — she is the one who started it all!

Lady Danbury — who I THOUGHT was Lady Whistledown for the majority of the show — is the one who was like a mother figure to young Simon.

Can we take a moment of silence for Simon — he isn’t going to be in the second season of Bridgerton — and that makes my heart — or maybe my loins — sad. Ha!!

But this NEW Bridgerton spinoff is going to be something new altogether.

Now, Golda Rosheuvel plays Queen Charlotte in the Bridgerton series, but she may not be in this new show depending on when it is set in time.

We will just have to see.

Many viewers had never known the story of Queen Charlotte before Bridgerton brought her to the world, and I’m thrilled this new series will further expand her story and the world of Bridgerton.

Shonda and her team are thoughtfully building out the Bridgerton universe so they can keep delivering for the fans with the same quality and style they love. And by planning and prepping all the upcoming seasons now, we also hope to keep up a pace that will keep even the most insatiable viewers totally fulfilled.

Did you catch that?? “ALL THE UPCOMING SEASONS!!”

Does that mean Bridgerton will just keep going and going?

If so, I’ll keep watching and watching!