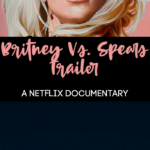 There is a documentary headed to Netflix called ‘Britney Vs. Spears’ and it’s been in the works for more than a year now, the wait is nearly over though!

So far an 18-second teaser of the new film was released the other day and the actual trailer was released today, Wednesday, September 22nd.

The documentary is directed by Erin Lee Carr and is going to focus on the 13-year conservatorship and how unusual it is.

Erin Carr also did Netflix’s ‘How to Fix a Drug Scandal’ and HBO’s ‘I Love You, Now Die: The Commonwealth vs. Michelle Carter’.

This documentary was in the works before ‘Framing Britney Spears’ came out.

Britney’s life has been in the spotlight with the ‘Free Britney’ movement for some time, many people were fighting for her to have her freedom.

Britney was finally able to give her own testimony on June 23, and called her conservatorship “abusive,” and I agree.

I have the right to use my voice and take up for myself. I can’t let the public know anything they did to me and by not saying anything, is saying it’s okay.

Britney Spears said to the judge on June 23rd

The Netflix ‘Britney Vs. Spears’ documentary will debut on the streaming service on September 28th, the day before her next court date.