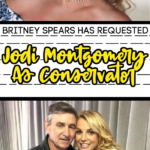 As Britney Spears continues to take steps towards regaining control of her life, she has requested that Jodi Montgomery become her permanent conservator.

The petition is dated Monday, March 22nd, 2021. Jodi is a professionally licensed conservator and has been serving as a temporary conservator in place of Jamie Spears.

Jodi was placed in that role back in September of 2019. The petition that has been filed is requesting that Jamie be removed as a conservator of her person.

This is a role in which he has served since 2008! Britney also wants to petition to terminate the conservatorship altogether.

So, what will Jodi be in charge of if this happens?

Well, she will be able to restrict and limit guests (excluding Britney’s lawyer). As well as make arrangements for location and security for meetings.

Any time Britney wants to end her conservatorship, she can ask her lawyer to file a petition to terminate it; she has always had this right but in 13 years has never exercised it. Britney knows that her Daddy loves her, and that he will be there for her whenever and if she needs him, just as he always has been—conservatorship or not.

She will also oversee security guards and caretakers. She can handle restraining orders, and also access medical records and communicate with Britney’s medical personnel.

This is basically extending on what they tried to do last August when the judge ruled that Britney’s dad would stay on as co-conservator. The new hearing is set to begin on April 27th, 2021.

I know there are a lot of feelings about Britney. But even if she does have issues, she should have a say in who helps her manage life.