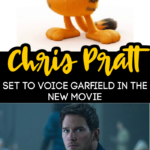 Love him or hate him, Chris Pratt is moving on up in the world. I feel like I’m hearing about him nonstop!

He just scored the voice of Mario, and now he’s moving on to ALSO scoring the voice for Garfield in the newest animated movie!

Pratt announced the news by posting a picture of Garfield on his Instagram saying, “Well this Monday doesn’t suck…”.

Garfield was previously voiced by Bill Murray, so you could say it’s big shoes to fill, but honestly, I think Pratt is perfect for the role!

What are your thoughts on this new role for Chris Pratt? Happy, sad, apathetic? Let us know in the comments!