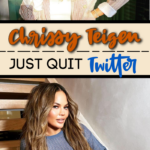 Chrissy Teigen has had enough of the trolls and haters on the Twitter platform.

She has officially “quit” Twitter, and now the social media giant just doesn’t seem quite as much fun.

The platform no longer serves me as positively as it does negatively, so with that I bid you adieu.

In case you had any worry that this was somehow Twitter’s fault, Chrissy makes it quite clear, “this is absolutely NOT twitter’s fault – I believe they do all they can to combat relentless bullying.”

Chrissy does say that it’s not bullying that caused her to leave.

But, bullying comes in many forms.

She obviously had a problem with the QAnon cult group, because she left them a parting message.

And to the Q anon people who think I’m in Guantanamo Bay right now, lol. I saw “Q: into the storm” and saw what I’m working with here. And I, lol, I no longer care. Don’t flatter yourselves.

In case you aren’t familiar with what QAnon is, and what they stand for, this is a quick description from the BBC — I had to look them up, because I’d never heard of them.

At its heart, QAnon is a wide-ranging, completely unfounded theory that says that President Trump is waging a secret war against elite Satan-worshipping paedophiles in government, business and the media.

I can’t even imagine having to deal with those followers on a daily basis over on her Twitter feed.

No wonder she left, right?!?

I’m happy to report that Chrissy is still on Instagram, at this time.

She seems so down-to-earth and real. I just LOVE stalking looking at her IG page.

I WILL miss her Tweets about “Night Eggs” and the like, but at least we can still follow her crazy surreal life on that OTHER wildly popular social media platform*!

*I’m talking about Instagram, in case that wasn’t clear. LOL!!

2 shares
Jet-Puffed Has Marshmallow Bites That Are Covered In Chocolate And I Call Dibs On The Coconut
← Previous
This Mermaid Scale Mug From Starbucks Looks Like It Came Straight From The Deep Sea
Next →
Click here to cancel reply.